Christmas time is a time of magic. And no one does magic better than Father Christmas himself. But let’s be honest, Santa has enough to do with travelling 510,000,000km and carrying 840,000 tonnes of presents! So naturally he does not also make all the toys himself. That job he leaves to his elves.

Most of Santa’s elves, we are sure, work very hard for him year round and extra hard of course as Christmas approaches. However, Space can confirm that recently Santa has had to deal with some slackers, some lazy elves. Santa’s operation is massive! Gigantic beyond comprehension. So there is no room on the production line for messing around. However this year it seems Mr Claus has had to have words with some of his elves about not towing the line. You would think that that would snap them back into action but it seems a stern talking-to from the big man was not enough for some of his more idle helpers!

Here at Space we are in a unique position to confirm that Santa has taken extreme measures this year to discipline his bad elves. We regret to inform you that the boss man is now threatening his elves with confinement – imprisonment. But where will Santa lock up these naughty elves? Not in a cozy, firelit elf cottage in lapland. No! Santa’s proposed punishment is much more severe. 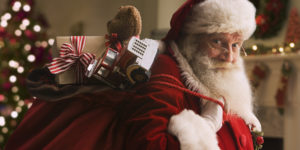 You see, this is how Space has acquired a new customer. We can now reveal that our new celebrity customer is… the one and only Santa Claus! Yes, Mr Claus has rented a 150 square foot storage unit, our largest one available. He dropped into us last week to take a few pictures of the unit. He wanted to highlight the austere surroundings of a modern industrial storage unit – cozy for boxes but not for elves. Santa informed us that he would be posting the photos on elfbook as a warning to his lazy elves. We had a peek on elfbook and we also came across this photograph so there can be no doubting Santa means business.

As yet Mr Claus’s unit remains empty. It seems the ploy has worked for old saint nick and his little helpers are back working hard as ever. That should mean that there will be no disruption to production and no issues with distribution. So all good little boys and girls can expect to see their prezzies magically appear under the tree as usual.

Watch this space. We’ll let you know if our facility receives any new lodgers!